Dave Wacker founded Wacker Sanitary when he bought the company in 1990 from Orval Ray.

With just a single truck and about 800 clients started his enterprise and did all the garbage pick up himself.

Before we had curbside recycling he would take Jaimy, 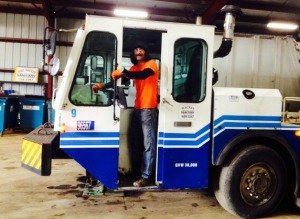 his youngest son out with a big full size van and pick up recycling for the customers that wanted to recycle.

Then in the early 90’s Portland gave the garbage haulers franchise borders.

Dave still hauled the garbage himself, but for the curbside recycling program, he hired it out to East Side Recycling. Then in 2008 Dave brought Jaimy back on board, and bought Bud Hoffman’s route to go from 800 to around 2200 customers.

Now, Wacker Sanitary has three full time employees and proudly service the garbage, recycling, and compost. Dave continues to drive and pick up.